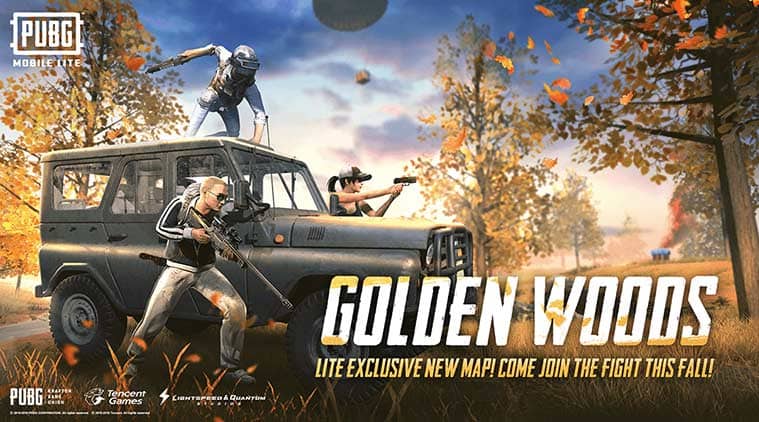 PUBG Mobile Lite has just received a major update which adds a new Golden Woods map to the game along with other add-ons like a new gaming mode and a new vehicle. The PUBG Mobile lite 0.14.1 update is now live for Android users and can be downloaded from the Google Play Store.
Advertising
The new Golden Woods map is exclusive to the lite version of the game and it has a small-town setting with shrubs– somewhat like a combination of Erangel and Sanhok. The game now also comes with designated missions to unlock achievements.
Other updates of the new version of PUBG Mobile Lite include the addition of new ‘Firefight: War’ mode of RPG-7 and a new four-wheeled UAZ vehicle. The PUBG Mobile Lite v0.14.1 update also adds new firearms to the game, which include the PP-19 sub-machine gun, QBZ, and QBU DMR rifle.
Additionally, the new update also adds a new Title System to the game, which shows a particular skill to other gamers during the spawn. Also, the new ranked season in the game will begin on October 1 with new rewards.
The changelog of the update also claims to fix display bugs in some maps as well as other bugs causing sorting issue under the event interface. Separately, when the game is opened, it shows a banner with Amazon Prime promotional offer where players can get additional items in the PUBG Mobile Lite with the Amazon Prime membership.
For the Amazon Prime members, the freebies include an exclusive Infiltrator Mask, Infiltrator Jacket, Infiltrator Pants, and Infiltrator Shoes, Black Magma Parachute, and brand new Blood Oath — Karabiner 98K

Popular posts from this blog

How to Move From One Tab To Another In Web Browser.

This can make surfing the internet a bit more fun if you know how to do it. I am the type of person that usually open a lot of tabs when I am using the internet. To save myself the stress of mousing around when I want to view an open tab, I use this. Ctrl + Tab will take you from tab to the next one. Ctrl + “Any number”  will the open the tab of that number.
More »

If Someone Is Hacking Your Computer How To Know.

Is someone hacking your computer ? With the use of command prompt, you can detect an unknown computer that is connected to your computer and stealing your private files. Open the command prompt and type netstat -a. Look at the result closely. The column named proto indicates if the connection is TCP or UDP. Local address column indicates the port of connection. Foreign address column displays the external computer that is connected to you and its port. State indicates whether the connection at that moment or not.
More »

Computer Trick to Rotate Your Screen.

It is an amazing trick that I like doing. You can use it to turn your screen upside down. Hold Ctrl + Alt + the Arrow keys. Use it to freak you friends out. Result :
More »